How Morphic Resonance Affects Our Memories, Families, Rituals and Festivals

A talk given on September 2nd, 2022 at the Hollyhock retreat center on Cortes Island, BC Canada. He explores the theory of morphic resonance in terms of its potential influence on human relationships and cultural practices, and aspects of memory.

All cultures, as far as I know, have holy places. Our ancestors were hunter-gatherers, by their very nature nomadic, and seem to have carried out ceremonies at holy places like Lascaux and Chauvet caves. When people settled in the Neolithic, starting twelve thousand years ago, they were building ceremonial structures, including standing stones and stone circles. Some were built before settled agriculture began. Even in atheist regimes where there's an explicit denial of the sacred and of the holy, the need for holy places persists, like the mausoleum of Lenin in Red Square, in Moscow, to which people went on pilgrimages, rather in the same way Christians visit the relics of saints. Recorded on February the 16th 2022, at the Meditatio Centre London. Created by I AM Sound Academy.

Re-enchanting the World: How to Learn From Animals

The opening keynote talk at the 2021 Mystics and Scientists Conference, hosted by the Scientific and Medical Network. The entire conference is now available on their channel.

A sermon given on Trinity Sunday, 2019 at St Thomas' Church, Finsbury Park, London.

Rupert shows how wave-patterns can give rise to forms, and discusses the history of liquid computers. A talk by Rupert at the International Conference on the Physics, Chemistry and Biology of Water, in Bad Soden, Germany, in October 2019.

The Death of New Atheism?

Interview on the Rebel Wisdom channel: Are we seeing the end of the new atheism associated with the likes of Richard Dawkins? If so, what will that mean for our conception of ourselves, and could it lead to progress in science and human knowledge.

A talk at the University of Northampton – Psi phenomena are called ‘paranormal’, meaning ‘beyond the normal’. In fact they are not only normal but common and there's good evidence that these phenomena are real, yet dogmatic skeptics continue to denigrate these phenomena and anyone speaking of them as 'woo woo'.

Is The Sun Conscious?

A provoking talk which asks us to look beyond the strict confines of scientific materialism and consider how the consciousness of stellar bodies is not only of anthropological or cultural interest but a valid field of enquiry in modern philosophy, psychology, cosmology, and neuroscience. Recorded at the Electric Universe UK Conference, 7th of July 2018, in Bath.

If God exists how does he or she work?

Rupert maps out the topography of divinity, weaving together the teachings of diverse religious traditions. A talk at Hollyhock, Cortes Island, British Columbia, August 9th, 2018.

Why is there so much beauty in the world?

A talk at Hollyhock, Cortes Island, British Columbia in August 2017. Rupert explores the evolution of the sense of beauty in animals and humans, and comes to the conclusion that beauty seems to be inherent in nature and also in our minds.

Thomas Fairchild was a pioneering plant breeder who lived in Shoreditch, in the East End of London. When he died in 1729, he left a legacy for a "Vegetable Sermon" to be preached each year in Shoreditch Parish Church in the week following Pentecost on "the wonderful works of God in creation". This sermon, on May 15, 2015, by Rupert Sheldrake, was on flowers.

On September 16, 2014, Rupert received the Doshi Bridgebuilder Award at Loyola Marymount University, Los Angeles. The award is given annually "to honor an individual or organization dedicated to fostering understanding between cultures, peoples and disciplines." 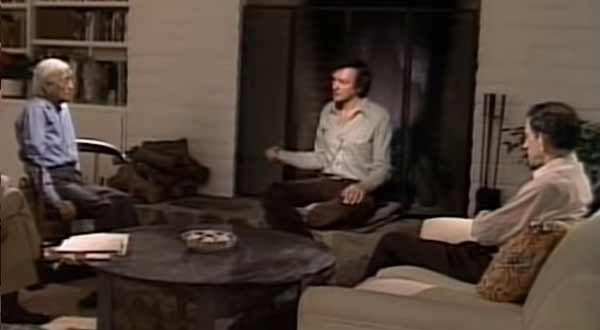 In 1982 J. Krishnamurti, David Bohm, John Hidley and Rupert Sheldrake came together to discuss the roots of psychological disorder, psychological suffering, the need for security and what is a healthy mind.