A debate at the 2016 "How The Light Gets In" Festival, at Hay-on-Wye, with Rupert Sheldrake, philosopher Massimo Pigliucci and CERN physicist Tara Shears, chaired by Philip Ball.

This surprise exchange between Daniel Dennett and Rupert Sheldrake at Hay on Wye came at the end of a longer discussion between Rupert, neuroscientist Colin Blakemore and novelist Joanna Kavenna on the machine as metaphor. 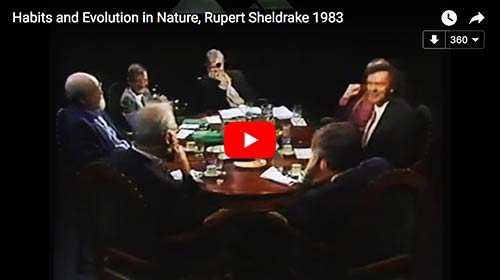 A Glorious Accident - the PBS Series

In this 1993 documentary on PBS, Journalist Wim Kayzer interviewed Oliver Sacks, Daniel C. Dennett, Stephen Jay Gould, Rupert Sheldrake, Freeman Dyson, and Stephen Toulmin individually before bringing them together for a roundtable discussion to consider a variety of broad questions. Watch an excerpt from the discussion as well as Rupert's interview.