Apparent Telepathy Between Babies and Nursing Mothers - A Survey 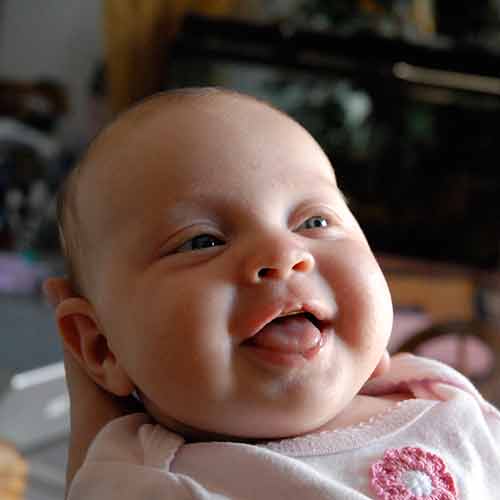 In nursing mothers, breast milk becomes available for feeding the baby through a physiological process called the let-down reflex, mediated by the hormone oxytocin, which is produced in the pituitary gland. As the let-down occurs, many women experience a tingling sensation in their breasts, and often the nipples begin to leak. This reflex takes only a few seconds and is usually triggered by the stimulation of the nipple by the baby, the sound of the baby crying, or even just by thinking about the baby (Stoppard, 1985).

Some nursing mothers claim that when they are away from the baby they often know when the baby needs them because their milk lets down (Eason, 1992). Here are two representative examples, taken from dozens I have received in response to appeals for information from mothers on this subject:

When my youngest son was a baby, I had the experience of my milk 'letting down' when I was away from him. This was accompanied by a 'knowing' that he needed me. When I would phone home, the sitter would always confirm that he had just awakened. Since he nursed on demand, he was never on a schedule. (Mrs C.L, Arlington, Washington State, USA).

I have 7 children, the eldest is now 12 and the youngest 7 months. I have fed 6 of my children and each time have experienced the 'let down reflex' when I leave them. I know when my baby cries when we are apart. The very second I think she may be crying I leak. When I get home she has usually been crying at the time I have leaked. My husband says that my boobs are like arials. I'm sure I can pick up their crying for miles. (Mrs P.B., Blackburn, Lancashire)

Most women who have had this kind of experience seem to take it for granted, and assume that it depends on a psychic bond. If they are right, this would imply a form of telepathy more physiological and fundamental that the kinds of ESP usually investigated by experimental parapsychologists and psychical researchers. The analysis of spontaneous cases of telepathy (e.g. Schouten, 1982) has already shown that people who are emotionally close seem more prone to communicate telepathically than strangers or unrelated people, and several experimental studies have supported this conclusion (Stuart, 1946; Rice & Townsend, 1962). In the ganzfeld telepathy experiments of Broughton & Alexander (1997), parent-child and sibling sender-receiver pairs produced exceptionally high hit rates.

There are two main alternatives to the telepathic hypothesis. First, there is the possibility that the phenomenon is an illusion caused by a combination of chance coincidence and selective memory: Milk let-down occurs for a variety of reasons when women are away from their babies for reasons unconnected with the babies' needs. The reasons could include the breasts being full after a long period away from the child, hearing other babies cry, and thinking about feeding the baby.

Second, it is possible that the let-down occurs as a result of physiological rhythms the mother and baby share, thus accounting for the synchronization of the baby's crying and the mother's let-down reflex, even when they are far apart. I have found that the synchronized-rhythm hypothesis is not usually taken very seriously by nursing mothers themselves, either because they feed on demand and do not have a fixed schedule, or because they do not leave the baby when it is due for a feed. But no research seems to have been done on this subject.

As a first step towards a systematic investigation of this phenomenon, I carried out a survey of 100 mothers who had recently had babies. My main purpose was to find out how common it was for lactating mothers to experience the let-down reflex when they were away from their babies, and how many of them had noticed that this seemed to coincide with their baby needing them.

This survey was carried out by telephone between June 1997 and March 1998. The 100 women had had babies six months to two years before they were interviewed by telephone. They were all clients of the Active Birth Centre, in Highgate, North London. Most were preparing for their first baby. This centre promotes yoga, natural childbirth and encourages breast feeding. Because it charges fees for its courses, most of the women in this survey were middle class. All the women on the records for particular periods were contacted, apart from those who had moved and could not be traced. They were asked if they would be willing to take part in a short interview about their experiences of breastfeeding. Practically all agreed to take part in this survey.

The interviews were conducted on my behalf by Nina Hope or by Diane McDonald, according to a standard questionnaire, shown in Appendix A.

Statistical comparisons were carried out by means of 2x2 contingency tables using the chi-squared test (Campbell, 1989).

The great majority of the women interviewed breast-fed their babies, 97 out of 100. This reflects the fact that as clients of the Active Birth Centre they were strongly predisposed to breast- feed if they possibly could. Of these 97 women, 91 (94%) fed on demand, that is to say in response to the baby's needs as opposed to a fixed schedule.

This left 62 women who were qualified to answer Question 7 as to whether their milk let-down when they were away from the baby coincided with their baby needing them or being distressed (according to the person caring for the baby at the time). Of these, 27 said they did not know, 19 said no and 16 said yes.

The mothers who breast-fed for less than 6 months probably had fewer opportunities to notice a coincidence of milk let-down with their babies' needs. It may also be the case that their absences from their babies were too short for their babies to show signs of distress when they were away from them, or they may have had babies that showed little sign of distress in their absence.

Most of the mothers (11 out of 16) who did notice a coincidence of milk let-down with their baby's needs said this 'usually' happened when they left their baby; two said it happened every time, and three said it happened 'occasionally'. Hence in further studies of this phenomenon, it should be possible to find a group of mothers to whom this happens in a fairly regular manner. However, milk let-down was not a completely reliable index of the baby's distress. In response to question 9, 6 of the mothers in this group said that they had learned of their baby's distress during their absence when their milk had not let down (9 answered no to this question and one could not remember).

Most of the examples of seemingly telepathic milk let-down I have received from mothers in response to appeals for information on this subject have come from women who have had two or more babies. By contrast, most of the mothers in the present survey had had only one baby. It may be that surveys of more experienced mothers would give very different results, both because such mothers would have had more opportunity to notice their reactions, and also because they may spend more time away from the babies, if only because they have other children to care for.

Apart from the phenomenon of milk let-down, in question 10 all mothers in this survey were asked 'While you were away from your baby, have you ever had a strong sense that your baby needs you, other than through your milk letting down?' Thirty-one out of100 answered yes to this question, and most of these women said in response to question 11 that this was a matter of general anxiety or intuition. Several women commented that their anxiety was more related to their own worries than to their baby's needs. But 3 women reported that they had felt something was wrong with their baby and either telephoned home or went to the baby and found that it was in distress because of a fall or other accident. Five women commented that they often woke up shortly before the baby needed them in the night.

Again, very different results might be obtained if surveys were carried out with more experienced mothers, and I hope that such surveys will indeed be done. Much light could be shed on the nature and development of telepathy by studying its role in the interrelationships between mothers and babies. I have already initiated a diary study in which nursing mothers note the times at which their milk lets down when they are away from their babies, while the carers note down the times at which the babies show signs of distress.

I am grateful to Nina Hope and Diane McDonald for carrying out the interviews, to Janet Belaskas, of the Active Birth Centre for making list of her clients available, and to all the mothers who took part in this survey. This work was supported by grants from the Lifebridge Foundation, New York and the Institute of Noetic Sciences, California.

Schouten, S.A. (1982) Analysing spontaneous cases: A replication based on the Rhine collection. European Journal of Parapsychology 4, 113-158.

The questionnaire used in the telephone interviews.

Q2. For how many months did you breast feed your baby?
a) less than one month
b) 1-6 months
c) more than 6 months
d) still breast feeding

Q4. Did you mix breast feeding with formula feeding prior to your baby starting on solids?
a) yes
b) no
c) can't remember

Q7. Did this ever coincide with your baby needing you or being distressed (according to the person caring for the baby at the time)?
a) yes (Please answer Q8)
b) no (Go to Q9)
c) don't know (Go to Q9)

Q9. Did you ever learn of your baby being distressed in your absence when your milk had not let down?
a) yes
b) no
c) can't remember

Q10. While you were away from your baby, have you ever had a strong sense that your baby needs you, other than through your milk letting down?
a) yes
b) no
c) can't remember