A Filmed Experiment on Telephone Telepathy with the Nolan Sisters 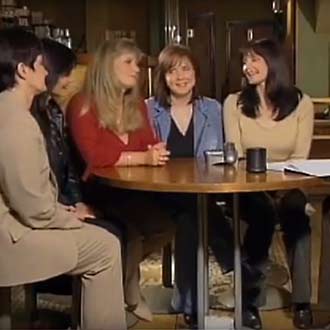 Journal of the Society for Psychical Research 68, 168-172 (2004)
by Rupert Sheldrake, Hugo Godwin and Simon Rockell

Apparent telepathy in connection with telephone calls is common. Many people say that they have known who was calling when the phone started ringing, or that they have thought of someone for no apparent reason, and that person called soon afterwards (Sheldrake, 2000, 2003; Brown & Sheldrake, 2001).

Is this just a matter of coincidence? Sheldrake & Smart (2003 a, b) have developed a simple experimental procedure for testing whether people really can tell who is calling, under conditions in which they could not know by any "normal" means. A participant receives a call at a prearranged time from one of four potential callers. He or she knows who these callers are. The experimenter chooses the caller at random by throwing a die, and then tells the caller that he or she has been chosen to call at a given time in the near future.

When the telephone rings the participant has to say who is calling before picking up the receiver. These tests are, of course, carried out using telephones without caller identification systems.

The present experiment was carried out in an attempt to replicate the telephone telepathy phenomenon for a television show called "Are You Telepathic?" made by 20/20 Productions and broadcast in the UK on Channel Five Television on June 19, 2003. The participant and her four callers were sisters, who had for years worked together in a girl band, the Nolan Sisters, popular in the UK in the 1980s.

In most of the previous trials, the callers were in different locations from each other and were not filmed. But in one previous experiment, all four callers were in the same location, and the callers as well as the participant were filmed continuously. In that test, carried out in Wakefield, Yorkshire, the participant was 1.5 km away from the four callers. She guessed correctly in 8 out of 17 trials (47%; p = 0.04) (Sheldrake & Smart, 2003a). The present experiment followed the same design as the Wakefield test.

Rupert Sheldrake (RS) and the five of the Nolan sisters, Anne, Maureen, Linda, Denise and Colleen, met in a basement bar in Poland Street, Soho, in the late morning. The bar was rented specially for this purpose, and was not open to the public at the time.

On camera, RS explained to the Nolan sisters how the experiment would be conducted. All were familiar with stories about telephone telepathy and most had had apparently telepathic experiences themselves. Only Anne was sceptical about their reality.

RS asked the sisters to choose which of them would serve as the participant. They picked Colleen, the youngest. Colleen was then taken by car to a private room, hired for the purpose, in the Strand Palace Hotel, about 1 km away. For the experiment we used landlines without caller identification displays. The telephone in the hotel room was a direct line that did not go through the hotel switchboard.

During the trials, Kate O'Driscoll and Hugo Godwin were in the Soho bar, with Rupert Sheldrake and the four callers. Simon Rockell was with Colleen in the Strand Palace Hotel. In both locations cameramen, sound recordists and other television personnel witnessed what happened. No one was allowed to use mobile telephones during the experimental trials.

Before each trial, the four potential callers and RS sat around a table, on which there was a telephone. Each of the four callers was assigned a number from 1 to 4, and RS picked the caller at random by throwing a die, using a casino-quality die and ribbed dice cup, purchased in Las Vegas. If the die showed numbers 5 or 6 it was thrown again.

When the caller had been selected, RS and the other three sisters left and went to a room upstairs, where they chatted about other subjects, trying to avoid thinking about Colleen. The three sisters not chosen for the trial were with RS continuously, and did not make any telephone calls.

The selected caller thought about Colleen, and was asked to call her at a specific time, according to a watch on the table in front of her. At the prespecified time, the caller dialled the number of Colleen's room at the Strand Palace Hotel. Colleen was not told exactly what time the call was due. When her telephone rang, she said who she thought was calling, and was asked to do this before picking up the phone. Both the caller and Colleen were filmed continuously on time-coded videotape.

Trials were conducted at approximately 5 minute intervals between 2.30pm and 3.40 pm. As agreed in advance, we carried out twelve trials altogether.

The videotapes of Colleen throughout the entire series of trials were evaluated "blind" by a third party, Pam Smart, who was not present during the experiments and did not know any details of the trials. She viewed the videotape of Colleen and from the time code on the film noted exactly when the phone rang and what Colleen said. She also recorded whether or not Colleen made her guess before picking up the receiver. Her account of Colleen's guesses perfectly matched the record RS made at the time. Pam Smart confirmed that Colleen received no other phone calls during the experimental sessions.

The results of the 12 trials are shown in Table 1.

Table 1
The 12 trials with Colleen Nolan as participant, with the exact times at which the telephone started ringing.


Out of the 12 trials, Colleen correctly identified who was calling in 6 (p = 0.05, both by the binomial and the chi-squared tests).

Colleen's scores with her four callers are shown in Table 2. The lowest success rate was with her eldest sister, Anne, who was sceptical about telephone telepathy. With Linda, who described herself as Colleen's favourite sister, she was right in both trials; with Denise and Maureen her success rate was 50%. However, she said "Linda" four times altogether, and was wrong twice, and said "Maureen" five times, and was wrong four times. Although she said "Anne" only once and "Denise" twice, she was right each time she said these names.

Colleen Nolan's guesses in response to calls from her sisters Anne, Denise, Linda and Maureen.


In Pam Smart's evaluation of the videotapes of Colleen, she noted that on two occasions (trials 8 and 12) Colleen picked up the phone before making her guess, contrary to her instructions. However, during the brief period before she made her guess, the sisters calling her said nothing. Nevertheless, it could be argued that subtle cues, such as breathing patterns, could have been audible to Colleen, and hence that these two trials should be excluded form the total. In one she was right, and in the other wrong. Excluding both, her score becomes 5 out of 10, still 50%.

Colleen Nolan's above-chance success rate cannot be explained in terms of "normal" sensory clues: there is no way she could have seen or heard which of her sisters was calling her from a basement 1 km away.

The positive result could simply have arisen by chance, but the odds against this explanation are 20:1. The effect observed here was consistent with previous experiments on telephone telepathy (Sheldrake & Smart, 2003a, b), and closely replicates them.

There could be two other "normal" explanations for this effect. The first is cheating. Perhaps one of the sisters in the Soho bar or one of the other people present directly or indirectly sent secret signals to Colleen through electronic devices, such as concealed mobile phones set to vibrate rather than ring. But all the people involved were under our direct observation throughout, all experiments were filmed continuously, and all the tapes of Colleen were evaluated blind, without any sign of cheating. Moreover, the Nolan sisters had never taken part in an experiment of this kind before and did not know the exact procedure before they came to be tested. It is not plausible that they prepared a cheating strategy in advance. We are confident that no deception was involved.

This argument seems unlikely to explain the results of these tests with the Nolan sisters. The callers were sitting at a table under continuous observation and were asked to make a call at a particular time, usually only two minutes in the future, so there was no possibility for them to forget or be late. In addition, Colleen did not know exactly when the calls would come, although she was aware that they would be roughly 5 minutes apart. Even if she had known exactly when the call was due, she was not watching a clock that would have enabled her to tell if a call was slightly early or late. Moreover, an examination of the exact timings at which Colleen's phone started ringing shows no discernible pattern (Table 1). There was a break between trials 3 and 4 because the TV crew needed to check that the filming was proceeding satisfactorily. In some trials (9, 11 and 12) the calls were not made at the usual 5-minute intervals, but this was not because the callers chose to make the calls late, but rather because the trials started later as a result of delays in setting them up. An explanation in terms of the use of conscious or unconscious clues through the detailed timing of the calls seems very improbable.

We conclude that the results support the hypothesis of telepathic communication. Of course, further replications will be needed, and in future tests it would be desirable to rule out the possibility of cheating using mobile phones. This could be done, for example, by using a mobile phone detector that would reveal whether any mobile phones in the vicinity were switched on.

We are grateful to 20/20 Productions and to Channel Five Television for making this experiment possible, to the Nolan sisters for their participation, and to the Lifebridge Foundation, New York and The Bial Foundation, Portugal, for financial support for Rupert Sheldrake.

Sheldrake, R. (2003) The Sense of Being Stared At, And Other Aspects of the Extended Mind. London: Hutchinson.