The Sense of Being Stared At: Do Hit Rates Improve as Tests Go On? 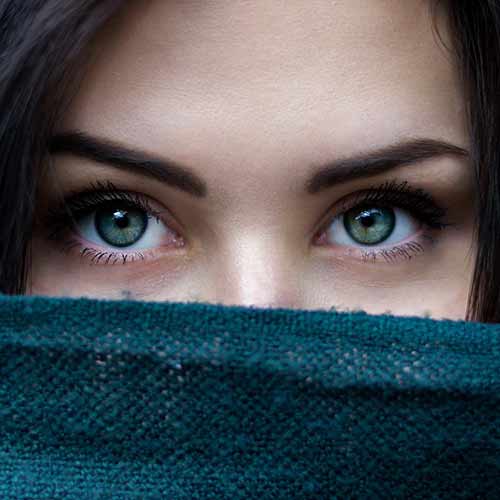 The sense of being stared at (or scopaesthesia: Carpenter, 2005) can be investigated experimentally with people working in pairs, with the looker sitting behind the subject. In a randomized series of trials, the looker either looks at the back of the subjects neck, or looks away and thinks of something else. The looker signals to the subject when the trial begins by means of a mechanically produced sound. After about 10 seconds the subject guesses out loud whether he or she is being looked at or not, and the starer records whether the guess is right or wrong (Sheldrake, 1999). By chance, 50% of the guesses would be correct.

Experiments of this kind are so simple that students can do them in classroom experiments or as projects. Many thousands of trials of this kind have been carried out in schools and colleges, with highly significant positive results. I have organized many of these trials myself, both with children and with adults, and they have been replicated independently by dozens of other investigators in several different countries (Sheldrake, 1998. 1999, 2003a, 2005).

The results usually showed a distinctive pattern: in the 'looking' trials, scores were above the chance level, usually around 60%, while in the 'not looking' trials they were close to the chance level of 50%, with overall success rates around 55% (Sheldrake, 1999, 2003a). The patterns of results was similar whether or not the subjects were blindfolded or received trial-by-trial feedback (Sheldrake, 2001), and when they were looked at through closed windows (Sheldrake, 2000) or through a one-way mirror (Colwell, Schröder & Sladen, 2001: experiment 1).

However, not all studies have given similar results. After obtaining highly significant positive results in their first experiment for trials in which feedback was provided (the no feedback condition was at chance), Colwell et al. (2001) conducted a second experiment in which they changed two conditions: a different person served as starer and they used a different randomization procedure. The results were close to the chance level. They concluded that the difference from their first experiment must be due to the randomization method rather than the change of starer. But their assumption that the difference in outcome could not be due to a change in starer may well be invalid: in a study using a different technique, in which starees were looked at through a closed circuit television (CCTV), Wiseman and Schlitz (1997) found a striking experimenter effect whereby the results were non-significant when Wiseman, a sceptic, was the starer, while with Schlitz as starer, the results were positive and statistically significant.

Marks & Colwell (2001) argued that the positive result in Colwell et al.s (2001) first experiment might be an artifact that arose because of a particular set of randomized score-sheets that I used in some of my experiments, and that Colwell et al. used in theirs. The randomizations involved counterbalanced sequences, and Marks & Colwell showed these particular sequences contained more alternations than would be expected in structureless randomizations. They argued that when starees were given trial-by-trial feedback, they could have learned implicitly there were patterns in the randomizations, and somehow used this information to score at above-chance levels. This hypothesis implies that scores should increase towards the end of tests because there has been more opportunity for implicit learning to occur.

Lobach & Bierman (2004) carried out two staring experiments with student participants in which starers and starees were separated by a one-way mirror. (They also carried out a study using CCTV.) In the first experiment, there was a significant positive result only with starers who were sceptics, and not with starers who were believers. In the second experiment there was no significant effect. They discussed several reasons for the weakness or absence of effects in their studies, including a possible inhibitory effect of the formal laboratory setting and the fact that starees were not blindfolded but had their eyes open and had to respond by making their guesses through a computer. Like Marks & Colwell (2001), they also explored the possibility that in some of my own tests, starees given trial-by trial feedback could have obtained hit rates above chance artifactually, through a combination of two effects. First, with randomization sequences that had too frequent alternations between looking and not-looking trials, starees could have elevated their hit rates by alternating their guesses. Second, if the total number of looking and not-looking trials was equal, or nearly equal, and if subjects remembered the number of looking and not-looking trials, then towards the end of the test it should become increasingly possible to predict whether a looking or not-looking trial would come next. Scores should therefore improve towards the end of the test. They carried out computer simulations that showed that such guessing strategies could indeed produce artifactual positive results. Moreover, by adding in a response bias in favour of saying "looking", their simulations reproduced a similar pattern of results to those found in many previous staring tests, with hit rates in 'looking' trials close to 60% and in 'not-looking' trials about 50%.

Thus both the Marks & Colwell hypothesis and the Lobach & Bierman hypothesis would predict that scores should improve towards the end of tests in which feedback was given.

By contrast, in a small-scale study with trial-by-trial feedback, Radin (2004) found the opposite: scores were highest in the first few trials and fell off toward the end of the session.

For all these reasons, it is of interest to know whether there is a general tendency for scores to increase or decline during tests on the sense of being stared at. I therefore re-examined the data from more than 19,000 trials conducted by myself and by other investigators to see if scores increased or decreased as the sessions went on. I did this by comparing the results from the first and second halves of the sessions, which usually consisted of 20 trials altogether. I analyzed results from tests conducted with and without feedback, and from tests using different randomization procedures: counterbalanced randomization sequences, structureless randomizations given by coin-tossing and computerized randomizations.

These comparisons enabled several different hypotheses to be tested:

In order to test these predictions, I have compared the results from the first and second halves of the test sessions.

I used data from my own tests and from those conducted by other investigators, details of which have already been described in previous publications. I retrieved the original score sheets for all these tests, and examined these score sheets to find out how many guesses were correct in the first and second halves of the test session for each subject. These 'first' and 'second' scores were then tabulated.

I also included data from an experiment conducted with automated instructions online in which the randomization was provided by an automatic randomization system, as described by Sheldrake (JSPR, under review). As in the coin-tossing method, the number of looking and not-looking trials in each test varied at random, although on average there were roughly equal numbers of each. In these tests with automated instructions, some starees received feedback and others did not. As described by Sheldrake (JSPR, under review) data from high-scoring participants (those with more than 17 hits out of 20) were not included in the analysis because of the possibility that they might have been cheating.

In this paper I describe the results of all these pre-selected data-sets there was no exclusion of data-sets after the analysis had been conducted. The details were as follows:

The statistical significance of the hits rates was calculated using the binomial test, one-sided, with the null hypothesis that the hit rates would be at the chance level of 0.5. For a comparison of the hit rates in the first and second halves of each experiment, the 2x2 chi-squared test was used (Campbell, 1989).

In the experiments without feedback, the scores were above chance levels in both the first and the second halves (Table 1B). In all cases, the percentage of correct scores was slightly lower in the second halves of the tests, but the differences were not statistically significant.

Comparison of hit rates in the first and second halves of test sessions with feedback (A) and without feedback (B). The total number of trials in each half is shown together with the numbers and percentages of hits in the first (1) and second (2) halves. There were three methods of randomization: by tossing coins (Coins), using counterbalanced randomization sheets (Sheets) and by an automatic computer-based randomization system (Auto). The column headed p diff contains p values from statistical tests for a difference between 1 and 2.

For the automated tests, the trial-by-trial results for tests with and without feedback are shown in Figure 1. The hit rates with feedback were generally higher than those without, but there was no obvious trend over time, nor was any significant trend revealed by linear regressions. The most striking feature was the data for the first trial, where starees who were about to receive feedback had an extraordinarily high hit rate of 67.7%, while those with no feedback were slightly below the chance level, with 47.8%. This difference was very significant statistically (chi-squared=21.9; p<< 1x10-6). 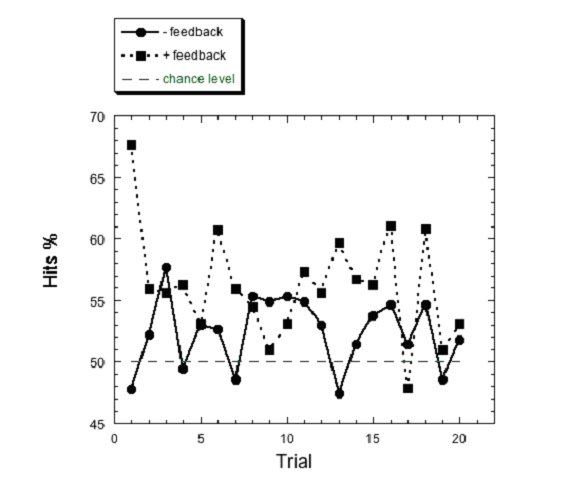 Figure 1. Trial by trial hit rates in the experiment with automated instructions online for tests with and without feedback.

The overall results were clear. In all experiments, the scores were very significantly above chance in both the first and the second halves of the tests.

These findings have the following implications for Hypotheses 1 to 3 outlined in the Introduction:

If the sense of being stared at is real, then it should be detectable from the outset of the session, and need not necessarily increase or decrease towards the end of the session. Thus the first and second halves should be more or less the same. With feedback, the scores might improve through a learning effect akin to biofeedback, and in fact there was a small and just-significant improvement (Table 3A). In trials without feedback, which are less interesting to take part in, there might be a tendency for subjects to get bored, or starers to concentrate less, leading to a decline. There was in fact a tendency for scores to decline, but it was not statistically significant (Table 3B).

In summary, the data from the first and second halves of these experimental sessions show a consistent pattern that goes against hypotheses that try to explain the results as artifacts. They support an interpretation in terms of the reality of the sense of being stared at.

This work was supported by the Lifebridge Foundation, New York, the Bial Foundation, Portugal, the Institute of Noetic Sciences, California, and the Perrott-Warrick Fund, administered by Trinity College, Cambridge.

Sheldrake, R. (2003a) The Sense of Being Stared At, And Other Aspects of the Extended Mind. London: Hutchinson.

Sheldrake, R. (under review) The sense of being stared at: an automated test on the internet. JSPR,
Wiseman, R., & Schlitz, M. J. (1997). Experimenter effects and the remote detection of staring. Journal of Parapsychology, 61, 197-208.