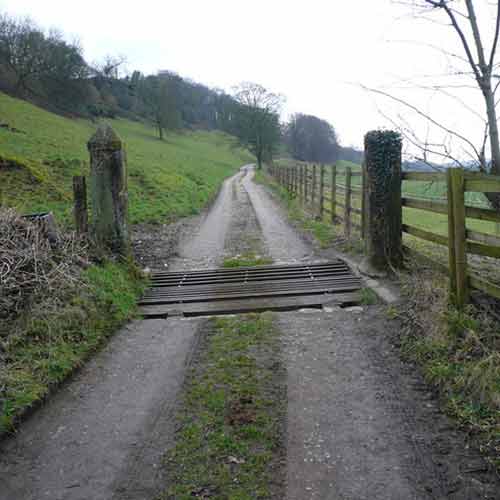 Ranchers throughout the American West have found that they can save money on cattle grids by using fake grids instead, consisting of stripes painted across the road. Real cattle grids, usually made of a series of parallel steel tubes or rails with gaps in between, which make it physically impossible for cattle to walk across them. However, cattle do not usually try to cross them; they avoid them. The illusory grids work just like real ones. When cattle approach them, they "put on brakes with all four feet", as one rancher expressed it to me.

I came to hear of these fake grids on a visit to the US last year when some friends from Nevada told me about them, rightly thinking that I would be intrigued. They suggested that this phenomenon might depend on morphic resonance.

According to my hypothesis of formative causation, described in my book A New Science of Life, organisms inherit habits from previous members of their species. This collective memory, I suggest, is inherent in fields, called morphic fields, and is transmitted through both time and space by morphic resonance, a process which takes place on the basis of similarity. From this point of view, cattle confronted for the first time by grids, or by things that look like grids, would tend to avoid them because of morphic resonance from other cattle that had learnt by experience not to try to cross them.

But what about more conventional explanations? One possibility is that cattle do not in fact inherit a disposition to avoid cattle grids; rather they acquire it individually through painful exposure to real grids, or else they somehow pick it up from more experienced members of the herd.

This does not seem to be the case. Ranchers have told me that herds not previously exposed to real cattle grids will avoid the fake ones. This has also been found by researchers in the departments of animal science at Colorado State University and Texas Agricultural and Mechanical University, with whom I have been in correspondence. Ted Friend, of Texas A & M, has tested the response of several hundred head of cattle to painted grids, and has found that naïve animals avoid them just as much as those previously exposed to real grids. Nevertheless, the spell of a fake grid can be broken. If cows are driven towards one under pressure, or if food is placed on the other side, a few will jump it; but sometimes one will examine it closely and then simply walk across. If one member of a herd does this, then the others soon follow. Thereafter, the phoney grid ceases to act as a barrier.

At least some sheep and horses also show an innate aversion to crossing painted grids. By contrast, in perhaps the only experiment of this kind ever carried out with pigs, the animals ran up to the painted grid, sniffed it, and started to lick it up. The Texas researchers had used a washable water-based paint, with a flour and egg base.

But what about the possibility that cattle, like many other species, have an instinctive aversion to walking over any kind of cliff? Painted cattle grids may work because they create the visual illusion of a drop. In this case, painted grids should have worked all along, and ranchers need not have used real grids in the first place. Leaving aside the question of how such an aversion might be inherited - by morphic resonance or by "genetic programming"-it would be worth trying to find out if wild species, never before exposed to cattle grids, show a comparable aversion to crossing them. It would also be worth finding out whether cattle respond equally well to a variety of visual cliffs, or whether those that look like cattle grids work best. If it is found out by experiment that the cattle-grid pattern is in fact superior to other stripy patterns, this would suggest that the response of cattle has evolved since grids first came into use less than a century ago.

Morphic resonance would provide an explanation for such a rapid evolutionary process. The main alternative would be a neoDarwinian speculation of doubtful plausibility. Assuming that mutant genes for avoiding cattle grids arose by chance, natural selection might have favoured them because animals lacking these genes would tend to injure themselves by trying to cross grids; and even if they did not die of broken legs, breeders would tend not to use them as parents, choosing instead uninjured, grid-avoiding cows and bulls. But, at least at present, there is no empirical evidence for the existence of mutant genes for grid-avoiding; nor that cattle grids have imposed a significant selection pressure.

The question is open. But whatever the explanation for the effectiveness of fake grids, Britain's hard-pressed farmers may be unable to economise by practising this simple deception. Phoney grids work well in the arid American West: they would probably work well in much of Australia, where they are apparently not yet in use, but here the illusion would soon disappear under layers of British mud.