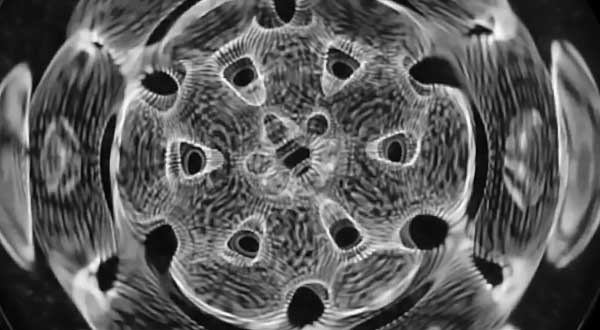 The remarkable wave patterns that can be produced when sound vibrates matter have been a subject of fascination for centuries. Leonardo da Vinci found that dust particles formed mounds and hillocks when the underlying surface was vibrated.

Similar phenomena were researched by Galileo Galilei, Michael Faraday, Lord Rayleigh and other notable scientists. Still, much remains to be discovered regarding these vibratory phenomena.

Scientific Papers on Form from Sound

The standing wave patterns formed on the surface of a vertically oscillated fluid enclosed by a container have long been a subject of fascination, and are known as Faraday waves. In circular containers, stable, radially symmetrical Faraday wave-patterns are resonant phenomena, and occur at the vibrational modes where whole numbers of waves fit exactly onto the surface of the fluid sample. These phenomena make excellent systems for the study of pattern formation and complex nonlinear dynamics. We provide a systematic exploration of variables that affect Faraday wave pattern formation on water in vertical-walled circular containers including amplitude, frequency, volume (or depth), temperature, and atmospheric pressure. In addition, we developed a novel method for the quantification of the time taken for patterns to reach full expression following the onset of excitation. The excitation frequency and diameter of the container were the variables that most strongly affected pattern morphology. Amplitude affected the degree to which Faraday wave patterns were expressed but did not affect pattern morphology. Volume (depth) and temperature did not affect overall pattern morphology but in some cases altered the time taken for patterns to form. We discuss our findings in light of René Thom’s catastrophe theory, and the framework of attractors and basins of attraction. We suggest that Faraday wave phenomena represent a convenient and tractable analogue model system for the study of morphogenesis and vibrational modal phenomena in dynamical systems in general, examples of which abound in physical and biological systems.

Rupert shows how wave-patterns can give rise to forms, and discusses the history of liquid computers. A talk by Rupert at the International Conference on the Physics, Chemistry and Biology of Water, in Bad Soden, Germany, in October 2019.