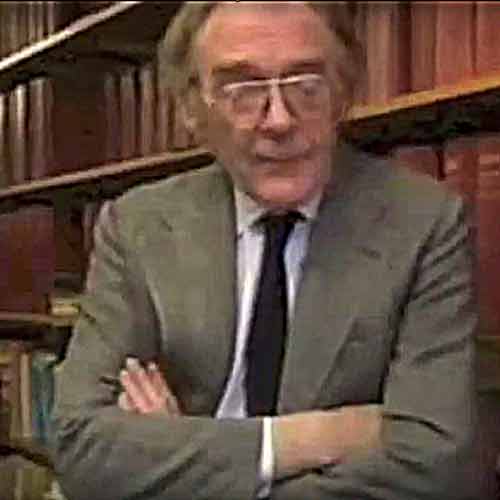 The late Sir John Maddox was my longest-standing critic. His Book for Burning attack in Nature on my first book in 1981 was followed by a series of hostile reviews in Nature and in British newspapers.

He was the author of an infamous editorial in Nature in 1981 about my first book, A New Science of Life, in which he wrote "This infuriating tract... is the best candidate for burning there has been for many years." In an interview broadcast on BBC television in 1994, he said: "Sheldrake is putting forward magic instead of science, and that can be condemned in exactly the language that the Pope used to condemn Galileo, and for the same reason. It is heresy."

A video clip of Sir John Maddox espousing these views is available here... 'A Book for Burning'

Rupert Sheldrake is steadfastly incorrigible in the particular sense that he persists in error. That is the chief import of his eighth and latest book. Its main message is that animals, especially dogs, use telepathy in routine communications. The interest of this case is that the author was a regular scientist, with a Cambridge PhD in biochemistry, until he chose pursuits that stand in relation to science as does alternative medicine to medicine proper.

Maddox then alludes to his attack on my first book, paraphrases my ideas about morphic fields and morphic resonance and traces their development over the years, concluding that Even Sheldrake's fiercest critics will applaud his consistency. He gives an overview of Dogs That Know... and summarizes some of the experiments with Jaytee. He then raises a number of questions:

By conceding that the data gathered during these observations are statistically significant, one does not sign up for Sheldrake's interpretation that the underlying mechanism is dog-Homo telepathy. Too many variables are uncontrolled. Did the accuracy of anticipation vary with the length of time elapsed since Pam's departure (suggesting that the dog used its sense of the passage of time to signal its sense of when return was due)? Were there people in the room with the dog (allowing them to communicate somhow with the eager waiter)? And while Jaytee appears to have been chosen for videotaping as a result of his acumen in earlier trials, does not the interpretation of his behaviour require an understanding of the variability of dogs' capacity for anticipation in general? The appendix in which these details are meticulously described is not so much a log of research under way as a record of one of those sets of observations preliminary to the design of properly controlled observations.

Maddox concludes his review as follows:

Especially because people's fondness for their pets often takes the form of projecting onto them human or even superhuman perceptiveness, even more than 1,000 records on the Sheldrake website do not prove telepathy.
I doubt that Sheldrake will take the point. He makes plain his distaste for what he calls orthodox science, which is all too often equated with a narrow-minded dogmatism that seeks to deny or debunk whatever does not fit in with the mechanistic view of the world. He is habitually courteous and cheerful, but holists of his ilk would not dream of letting controls get in the way of revealed truth.

On December 6, 1999, I wrote to Maddox as follows, taking up the scientific points he raised. He has not replied.

A letter to Sir John Maddox from Rupert Sheldrake:

I have read with interest your review of my book in Nature, and appreciate your having taken the time and trouble to read it.

In relation to the questions you ask about the experiments with the dog Jaytee, I think I have eliminated the idea that the dog used the passage of time to signal its sense of when the return was due. As you will see from my book, the longer the absence, the longer the time the dog took to start waiting at the door when Pam was on her way home. A statistical analysis comparing the long, medium and short experiments ruled out the passage of time argument (p. 249 of the British edition). So did the control experiments carried out when Pam was not coming home, shown in Figure B.2 (p. 250 in the British edition). So I think this question is already answered by the data.

Your second question is, were there people in the room with the dog? As I make clear in my account, in experiments at Pam's parents flat, her parents were in the room, but since they did not know when she was coming home, especially in the experiments with randomized return times, the only way they could have communicated this information to her would be if they themselves picked up telepathically when she was on her way. In experiments at Pam's sister's house, her sister was present but again, only a person-to-person telepathy argument would provide a real alternative. And then we carried out fifty experiments with the dog alone in Pam's flat. He still showed his reactions to a statistically significant extent when completely alone, as shown in Figure B.5 (p. 255).

Your third question about the variability for dogs' capacity for anticipation in general is obscure. At least it is too vague to answer - though I do have much data on dogs' anticipatory behaviour in general.

I enclose a recently published paper of mine in which I analyse the data of Richard Wiseman and his colleagues from their own experiments with Jaytee, conducted at my invitation (but in my absence). Their data agree remarkably well with my own, in spite of Wiseman's misleading portrayal of them in the media as a refutation of Jaytee's abilities.

In your final remark, you say holists of his ilk would not dream of letting controls get in the way of revealed truth. If you mean other unspecified persons, then it is meaningless and irrelevant. If you mean me, then what you say is unjust and untrue. I have done thousands of experiments over the years involving controls, as you can see by looking at my many published papers. And of course I use controls in my research with animals - as, for example, in Figure B.2 shown in this book, and also in my other experiments, as in Figure 16.2, p.233, summarizing the results of my tests on the sense of being stared at.

I have never regarded animal telepathy as revealed truth; it is certainly no article of faith for any religion, nor is it even mentioned in most books on parapsychology. I entered this field of enquiry with an open mind about what animals can and cannot do, and would not otherwise have spent years in empirical investigations of their abilities.

However, I am pleased that you express an interest in controls, and I would like to ask for your help in one of my current projects. As you see from the enclosed papers from the Journal of Scientific Exploration and the Skeptical Inquirer, I am proposing an experiment to test whether experimenter effects occur in the physical and biological sciences, using experiments with blind controls. If you could help in promoting this research I would be grateful.