A Powerful Challenge to the Materialist Worldview 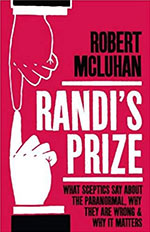 Review of The Science Delusion

For those of us who are suspicious of the claims of materialism it's astonishing, and also heartening, to hear a scientist agree that it's a hidebound ideology, dismiss the belief in determinism as a 'delusion' and call on the 'high priests' of science to abandon their 'fantasy of omniscience'.

This all sounds rather rhetorical, and the title seems to have been chosen as a counterblast to Richard Dawkins. Actually this is as polemical as his language gets; the book certainly has little about religion. For the most part it's a dispassionate expose of materialism's failures, and a plea for scientists to open up to new thinking. Despite his reputation as a heretic, gained from his controversial theory of morphic resonance and his psychic research, Sheldrake has impeccable credentials as a biochemist - Cambridge, Harvard, ground-breaking research and a stint in India helping to develop high-yield crops - that demand respect.

Sheldrake identifies ten core beliefs that scientists take for granted: that people and animals are complex mechanisms rather than goal-driven organisms; that matter is unconscious and human consciousness an illusion; that the laws of nature are fixed; that nature is purposeless; that all biological inheritance is carried via material structures like genes, and so on. Each is the basis of a chapter, in which he draws attention to unresolved tensions, problems and dilemmas. Most scientists think these will eventually be ironed out. However Sheldrake argues they are symptoms of a deeper malaise, and that the failure of the materialist model to make good on its predictions will eventually lead to its demise.

A key idea for Sheldrake is the existence of information fields that act as a kind of universal memory. Once a form or activity has come into being it provides the blueprint for other similar effects, which may then multiply with ease. The classic example is the formation of crystals, for which Sheldrake has elsewhere provided evidence, but in principle he thinks it can apply to anything, from the development of organisms to the acquisition of new skills.

This has implications for cosmology, he believes. Far from being set in stone since the Big Bang, nature's laws should be considered as evolving habits that grow stronger through repetition; the universe is an ongoing creative process, of which human creativity is part. In biology the machine metaphors beloved of materialist thinkers are misleading, he insists. No machine starts from small beginnings, grows, forms new structures within itself and then reproduces itself. Yet plants and animals do this all the time and to many people - especially those like pet owners and gardeners who deal with them on a daily basis - it's 'blindingly obvious' that they are living organisms. For scientists to see them as machines propelled only by ordinary physics and chemistry is an act of faith.

Despite the excitement over gene science in the past two decades, and the $100 billion biotechnology boom that it fuelled, only a very limited genetic basis has been discovered for human disease, he points out. The genes associated with development have turned out to be almost identical in mice, humans, flies and reptiles, offering no insights as to why these forms differ so dramatically.

On the subject of consciousness Sheldrake points out that even materialists can't decide what causes it, which is why there are so many rival theories. He quotes Galen Strawson, himself a materialist, who is scathing about the way fellow philosophers are willing to deny the reality of their own experience - testament to the power of the materialist faith. He approves Strawson's interest in panspychism, the doctrine that all matter is invested with mental as well as physical aspects.

There is just one chapter on psychic research: this covers telepathy and precognition, with especial focus on animal telepathy. (The sense of being stared at is covered in a chapter on consciousness.) There is also a chapter on mechanistic medicine, in which he acknowledges its record of success, but questions whether it is the only kind that works.

This is a superb and timely book. My own academic research has convinced me that psychic phenomena genuinely occur, and that the rejection of it is driven largely by ideology and personal antipathy. That being the case, it's hard to conceive that the materialist model is the whole story. Most scientists will brush off Sheldrake's arguments as a persistence of discredited vitalism, but it may encourage some to be open about the more sympathetic views that Sheldrake claims they often express to him in private.

There's also a need for a book like this that's authoritative, wide ranging and accessible, and that challenges the materialist paradigm for the benefit of a wider audience. That applies especially to young people whose ideas have not yet been shaped by it, and their curiosity tamed and dulled as a result. It would be good to think that their generation may have a greater opportunity to question the prevailing dogmas and perhaps eventually forge a new science, one that describes more closely what humans observe and feel about their world.