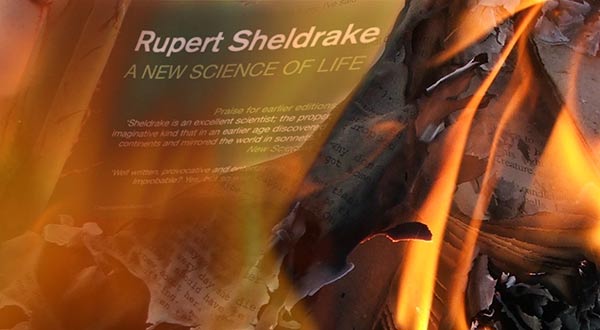 To John Maddox, then editor of Nature, Rupert's first book A New Science of Life was "the best candidate for burning there has been for many years."

At the other extreme, some have described Rupert as "a visionary genius of the stature of Darwin or Einstein." As Ted Dace wrote, "By devising a testable hypothesis of natural memory, Rupert Sheldrake has established himself as the world's central figure in the evolutionary theory of existence." Morphic resonance has been explored in the works of other philosophers, authors and artists the world over, even playing a central role in a popular video game. Indeed, Switzerland's leading think tank, The Duttweiler Institute, included Rupert in their rankings of the top 100 Global Thought Leaders for 2013.

The second edition of A New Science of Life included an appendix summarising the controversy surrounding it which you may download. PDF

When A New Science of Life was first published in June 1981, it received many favourable reviews and reactions, particularly in the Guardian and New Scientist. These positive responses infuriated the late Sir John Maddox, editor of the journal Nature. He published an editorial denouncing this book in September 1981, entitled A Book for Burning?. In this highly polemical attack he sought to excommunicate Rupert from the world of institutional science and to brand the hypothesis of morphic resonance as heresy.

In 1993, BBC television produced a film about Rupert's work and the controversy surrounding morphic resonance in which he said "Sheldrake is putting forward magic instead of science, and that can be condemned in exactly the language that the Pope used to condemn Galileo, and for the same reason. It is heresy." You can see his denunciation here as part of the BBC programme:

The Zeal of Robert Todd Carroll

A former professor of philosophy at Sacramento City College, the late Bob Carroll's true claim to fame came with the creation of "The Skeptic's Dictionary" website. Later he was elected a fellow of the Committee for Skeptical Inquiry, further solidifying his skeptic credentials.

Through his website, Carroll published critiques of morphic resonance and of Rupert's research with Aimee Morgana and her parrot N'kisi. These contained many false and misleading comments, to which Rupert offered these reasoned responses.

Michael Shermer is the publisher of Skeptic magazine, the Director of the Skeptic Society, the host of the Skeptics' Lecture Series at the California Institute of Technology, and the author of a regular column in Scientific American called "Skeptic". He has publicly attacked Rupert's work, and Rupert has responded.

More recently, Rupert and Michael Shermer held a three part debate covering the nature of science, the evidence for psi phenomena like telepathy, and the existence of God. This debate is online here, and has been published as a book called Arguing Science.

Meanwhile, New Scientist had changed from an open minded to a dogmatically materialist editorial policy, and the deputy editor of New Scientist, Graham Lawton, denounced the book without reading it. He made it plain if there were a review of the book under the new regime it would not give Rupert “the benefit of the doubt".

Comments on this article were abundant and solidly on Rupert's side. One critical remark came from IONS Chief Scientist Dean Radin.

The old book was indeed remarkable. The new one, should NS actually deign to read it, is even more remarkable because the evidence continues to compound in favor of Sheldrake's original hypothesis. Dismissals of evidence without benefit of serious review are unworthy of any publication with the word "scientist" in the title.

Since then Lawton's article has been removed from the New Scientist website, though

backups can be found on archive.org for those interested.