Sheldrake and His Critics: The Sense of Being Glared At 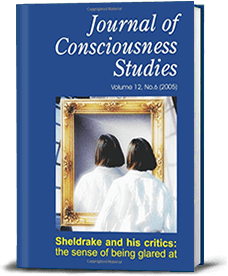 A special edition of the Journal of Consciousness Studies (JCS Vol 12 No. 6, 2005) in paperback format.

In 1981 Rupert outraged the scientific establishment with his hypothesis of morphic resonance. Subsequently he devoted his research to pioneering science, winning popular acclaim and continued establishment opprobium with a series of ground-breaking works. In this special edition of JCS, Rupert summarises his case for the 'non-visual detection of staring'. His claims are scrutinised by fourteen critics, to whom Rupert then responds. Anthony Freeman, in his editorial introduction, explores the concept of "heresy" in science and in religion and asks why it provokes such hostility.

What Is It Like to Be a Heretic? | PDF

Rupert's Papers From the Journal

Part 2: Its Implications for Theories of Vision | PDF

Anthony P. Atkinson
Staring at the Back Of Someone's Head Is No Signal, And a Sense of Being Stared At Is No Sense

William Braud
The Sense of Being Stared At: Fictional, Physical, Perceptual, or Attentional/Intentional?

Chris Clarke
The Sense of Being Stared At: Its Relevance to the Physics of Consciousness

Ralph Ellis
The Ambiguity of 'In Here/Out There' Talk: In What Sense Is Perception 'Out in the World'?

Dean Radin
The Sense of Being Stared At: A Preliminary Meta-Analysis

Marilyn Schlitz
The Discourse of Controversial Science: The Sceptic-Proponent Debate on Remote Staring

Stefan Schmidt
Comments on Sheldrake's 'The Sense of Being Stared At'

Max Velmans
Are We Out of Our Minds?