The Rebirth of Nature: The Greening of Science and God 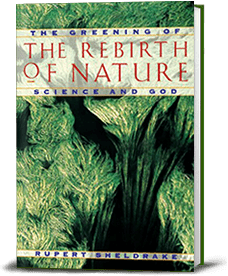 In The Rebirth of Nature Sheldrake urges us to move beyond the centuries-old mechanistic view of nature, explaining in lucid terms why we can no longer regard the world as inanimate and purposeless.

Through an astute critique of the dominant scientific paradigm, Sheldrake shows recent developments in science itself have brought us to the threshold of a new synthesis in which traditional wisdom, intuitive experience, and scientific insight can be mutually enriching.

"The Rebirth of Nature is a breakthrough book, beautifully written and spiritually oriented. It shows our intimate relationship with the universe — that we are a part of a breathing, living, thinking cosmos and that intelligence is a pervasive reality inseparably one with nature. This book will take everyone who reads it to new heights of understanding." — Deepak Chopra, MD

"This frontal assault on conventional science embodies a radical rethinking of humanity's place in the scheme of things." — Publishers Weekly

"A beautifully written, deeply felt, and sinuously argued challenge to many habits of thought." — Booklist