Natural Grace: Dialogues on Creation, Darkness, and the Soul in Spirituality and Science 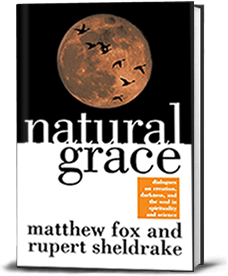 by Matthew Fox and
Rupert Sheldrake

The chasm between science and religion has been a source of intellectual and spiritual tension for centuries, but in these groundbreaking dialogues there is a remarkable consonance between these once opposing camps. In Natural Grace, Rupert Sheldrake and Matthew Fox show that not only is the synthesis of science and spirituality possible, but it is unavoidable when one considers the extraordinary insights they have both come upon in their work. Sheldrake, who has changed the face of modern science with his revolutionary theory of morphic resonance, and Fox, whose work in creation spirituality has had a significant impact on people's sense of spirit, balance each other with their unique yet highly complementary points of view. In these inspired dialogues a variety of ancient topics - including ritual, prayer, and the soul - are freed from the past and given new power for the future in the liberated universe Fox and Sheldrake show us.

"In these cogent and passionate exploratory dialogues, they discuss the evolution of our view of nature, grace, the soul, prayer, ritual, and education, drawing upon a diverse group of sources, including Greek myths, the Tibetan Book of the Dead, the Bible, the writings of Descartes, and Sheldrake's radical hypothesis of morphic resonance. As all productive dialogues should, these will inspire fresh perspectives and continued discussion." — Donna Seaman, Booklist

Dialogues on consciousness and spirituality with Matthew Fox.