Dogs That Know When Their Owners Are Coming Home: And Other Unexplained Powers of Animals 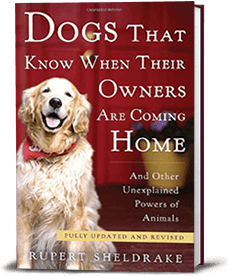 Many pet owners will swear that their dog or cat or other animal has exhibited some kind of behavior they can't explain. How does a dog know when its owner is returning home at an unexpected time? How do cats know when it is time to go to the vet, even before the cat carrier comes out? How do horses find their way back to the stable over completely unfamiliar terrain? And how can some pets predict that their owners are about to have an epileptic fit?

These intriguing questions about animal behavior convinced Rupert that the very animals who are closest to us have much to teach us about biology, nature, and consciousness. With a scientist's mind and an animal lover's compassion, Rupert compellingly demonstrates that we and our pets are social animals linked together by invisible bonds connecting animals to each other, to their owners, and to their homes in powerful ways. Rupert's provocative ideas about these social fields explain the uncanny behavior often observed in pets and help provide an explanation for amazing animal behavior in the wild, such as migration and homing.

First published in 1999, a new revised edition was released in the US in 2011

"Delightful . . . this book will turn our understanding of animals inside out." — Jeffrey Moussaieff Masson

Research by Rupert Sheldrake and Pam Smart
A Film by the Science Unit of ORF, Vienna