Think someone's staring at you? 'Sixth sense' may be biological 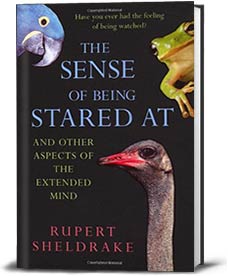 Related Book
The Sense of Being Stared At

If Rupert Sheldrake is right, at least seven out of 10 of you reading this article have felt the prickly sensation of being stared at. Maybe you've also had feelings of foreboding that later proved true. Or perhaps you've been startled to answer the phone and hear the loved one you were just thinking about.

Far from paranormal, these experiences are rooted in our biology, says Sheldrake, a Cambridge-trained biochemist and maverick thinker who's been called "a scientific heretic who refuses to be burnt at the stake."

He says scientific exploration of these common experiences could lead to a new understanding of human and animal minds -- if science could overcome its dogmatic hostility toward this line of inquiry.

"This field of research is inherently controversial," said Sheldrake, who has been touring with his new book, "The Sense of Being Stared At, and Other Aspects of the Extended Mind" (Crown, 370 pages, $25).

"In my book, what I'm trying to do," he said, "is put forth the scientific evidence."

Sheldrake argues for a new concept of the mind -- one not bounded by the brain, but operating through fields of influence that he believes are present throughout nature. He suggests these "morphic fields" organize the development and behavior of animals, plants, social groups and mental activity, from human and animal telepathy to such everyday mysteries as the synchronized swooping of flocks of birds.

"I don't claim to explain all these things or to understand them," Sheldrake said. "I say, here's what seems to be going on."

For example, he posits that telepathy is a kind of morphic field, a social field that allows distant members of a pack or tribe to stay in contact or warn of danger. As an example he cites wolf packs, which scatter over hundreds of miles to hunt without losing their group cohesion.

"Telepathy depends on social bonds," Sheldrake said, adding that the ability seems to be stronger in animals than in most people.

In the modern world, he said, the most common example is telephone telepathy -- sensing who's on the phone before you pick up the receiver, especially if the caller is a close friend or relative.

He said the phenomenon also occurs with e-mail, a topic he plans to discuss at Microsoft. As of last September he had completed 160 experimental trials of e-mail telepathy, designed to yield a 25 percent success rate through random chance. He said his 43 percent success rate was "very significantly above the chance level."

As the title of his book suggests, the sense of being stared at is the most common "paranormal" event, reported by 70 to 90 percent of the adults Sheldrake surveyed. He speculates that focused visual attention has an effect that extends beyond the eye and brain of the observer.

Sheldrake may be a free thinker, but he doesn't subscribe to every unorthodox idea. He suspects "a lot of what comes through channellers is colored by their own mind" and he questions accounts of past-life regression, saying, "You can get people to think all sorts of things under hypnotic suggestion."

What he finds most baffling are premonitions that precede tragedies, such as the sinking of the Titanic and the terrorism of 9/11. He quotes an eerily prescient dream that occurred five days before the 9/11 terrorist attacks, as reported by Mike Cherni, a forensic scientist who worked 300 yards from the World Trade Center. In the dream, Cherni said, he was on an airplane and grew alarmed as the plane took an unusual flight path, very low over Manhattan's buildings.

"It was clear that we were flying directly south over the southern tip of the island," says Cherni's account. "Then there was a tremendous impact and I woke up. This dream disturbed me for days afterward, enough that I described the dream to my wife."

Others reported dreaming on Sept. 10 of crowds fleeing down the stairwells of a burning World Trade Center, or of buildings collapsing or planes crashing or people running in panic.

Sheldrake finds it intriguing but said he has no conceptual framework for these accounts. "I don't know how precognition works," he said. "It's much more mysterious, to my mind, than telepathy or the sense of being stared at."

For his views, Sheldrake has been called everything from visionary to crackpot and, in the spirit of free debate, he posts the remarks of his most vocal critics on his Web site, www.sheldrake.org The most memorable brickbat came from Sir John Maddox, emeritus editor of the scientific journal "Nature," whose 1981 quote about Sheldrake's first book, "A New Science of Life," has become legend: "This infuriating tract . . . is the best candidate for burning there has been for many years."

Sheldrake said healthy skepticism is essential to science, but he objects to "dogmatic skepticism," or "scientific fundamentalism," which rejects on principle the exploration of anything outside conventional theories. As a result, Sheldrake said, many areas of human and animal behavior have never been investigated. "The mind itself, and what the mind can do," he said, "is almost virgin territory."

Sheldrake, who has explored the topic for more than a decade, solicits anecdotes from the public and publishes experiments readers can try at home. He claims to have a database of 4,000 case histories, 2,000 questionnaires and 1,500 telephone interviews in addition to controlled experiments.

Despite his critics, Sheldrake is considered a cutting-edge thinker in non-traditional circles, and he said many mainstream scientists have encouraged him as well. Sheldrake has been a speaker several times at the Whidbey Institute, an admittedly non-scientific group on Whidbey Island devoted to ecology and spirituality.

Sheldrake, 60, studied philosophy at Harvard and natural sciences at Cambridge University, where he earned a doctorate and became director of studies in biochemistry and cell biology. He spent the first two decades of his career in mainstream academia, studying plant biology. In the 1970s he worked in India as principal plant physiologist at the International Crop Research Instititute for the Semi-Arid Tropics. He also spent time at an ashram.

"I first became convinced that living organisms were organized by fields," Sheldrake said, "when I was doing research at Cambridge University on the development of plants."

While genes and molecules provide the building blocks of life, they don't explain how the parts are assembled to create a living organism, said Sheldrake, who suggests that morphic fields provide the organizational blueprint.

He sees this organizing force as a kind of collective unconscious that allows members of a species to draw from, and contribute to, the collective memory of the species.