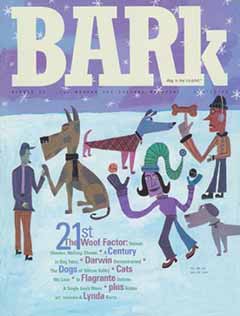 Bark Magazine No.10: Winter 2000
Sheldrake and Bekoff discuss psychic behavior in pets and the relevance of some recent studies

The Bark is pleased to present a conversation between Dr. Rupert Sheldrake and Dr. Marc Bekoff discussing psychic behavior in pets and the relevance of some recent studies. Rupert Sheldrake, a former Research Fellow of the Royal Society at Cambridge University, has a Ph.D in biochemistry. His research into unexplained perceptiveness in animals, such as telepathy, sense of direction and premonition, challenges traditional scientific assumptions. Marc Bekoff is a professor at the University of Colorado; his main areas of research include animal behavior, cognitive ethology and behavorial ecology. He has studied dogs and their wild relatives for 30 years.

Marc Bekoff: In your new book, Dogs That Know When Their Owners Are Coming Home, you write about morphic fields. Could you explain what a morphic field is?

Rupert Sheldrake: Morphic fields are concerned with the organization of self-organising systems. For animals in social groups, morphic fields hold the different members of the group together and coordinate their activity. So, for example, a flock of birds can turn at the same time because they're in a morphic field phenomenon. They're not all just looking at the next bird at the same moment; their reactions are too quick for that. I think they're responding to a kind of collective field. I would say the same of schools of fish, packs of wolves and, indeed, groups of people.

Bekoff: I've studied coyotes and I've seen packs of wolves; one pack chases another, and their movements are so fluid. You get the feeling that there was simply no way that they were thinking about it, it's almost as if something is driving them. With, say, a flock of birds or a herd of gazelle, or watching a school of fish or wildebeest running across the African plains, you see the same phenomenon-they don't hit one another!

Sheldrake: It's wonderful the way these groups of animals can move together in such ways. They all can do it. Any animal that travels or hunts in a group has to have a way of moving where they're not colliding all the time. It always amazes me how deep-seated this ability is.

Bekoff: I race bicycles. When you're going downhill at 60 miles an hour in the middle of a bike pack, if you don't intuit subtle shifts in the group's movement, you could die. The only way I can explain the movement is that it seems to be almost telepathic. You have to have a lot of trust in the other people. Often you'll avoid an accident and someone will ask, "How did you know what to do?" You just do it and don't think about it!

Sheldrake: That's exactly the kind of thing I'm suggesting here. Human social groups are coordinated by these fields and so are animal social groups. So when a dog bonds with a person this creates a morphic field of social bonding. It's a fancy way of talking about social bonds, but "bonds" is simply a word, a metaphor, whereas the morphic field is a real connection. The idea of the morphic field makes it easier to understand how when the person goes far way, the bond linking them to the dog is still there, acting as a channel for telepathic communication. The word "bond" doesn't really convey this sense and you wouldn't necessarily expect a bond to work at a distance. I think these field have measurable effects, which is the purpose of the experiments that I discuss in my book. But the reason I think the morphic field concept is helpful here is that it ties these pet phenomena with a larger theory about social behavior and yet larger theory about self-organizing systems in general, not just social groups.

Bekoff: Do you think that understanding morphic fields and self-organizing systems will ultimately help to connect people back to nature and back to the animals with whom we live?

Sheldrake: Yes. I think that people keep animals as pets because we want to have this connection to nature through them. Otherwise, why would millions of people have pets? They can be a nuisance and they're an expense, but obviously the benefits outweigh the disadvantages. That bonding with nonhuman nature is absolutely essential to us-it's really part of our nature to have that connection. Understanding our connections with animals better and studying these telephatic links will help us reconnect with the animal kingdom, or at least recognise more explicitly that this connection exists.

Bekoff: This supports my notion that it's almost a biophilia phenomenon. People have a really strong, evolved genetic drive to connect with nature, and present-day society has ripped most of us apart from the natural world. We feel very torn because we can't explain this connection or our desire for it. I'm a hard-core scientist yet I don't find what you're saying offensive. But when I mentioned to some colleagues that I was reviewing your book they said, "Oh, that stuff's been around forever." I replied, "yeah, but nobody's ever dealt with it."

Sheldrake: Most of the phenomena I'm writing about have been known by pet owners for generations and, indeed, they're the kinds of things veterinarians hear about but don't systematically think about. What's new is not the phenomena, but the attempt to deal with it systematically and to try to do experiments on some of these phenomena so we can connect it up with some sort of scientific reality.

Bekoff: I think that some people are simply afraid of what all this could mean. I'm working on a book on animal emotions right now, and getting most scientists to write about emotions is very difficult. Why are they afraid to think that dogs can feel love and so these amazing things? Why are they afraid to think that other animals can have this whole range of positive emotions? I think because of the horrible things that people do to animals, they don't want to 'fess up to the fact that animals are alive and sentient, bright and intuitive.

Sheldrake: I think it's partly that. It's partly the legacy of a mechanistic ideology which treats animals as solus automata. This is in part the ideology on which biology has been based for a long time. And people are very reluctant to admit such heterodox views in public because they think someone will jump on them and accuse them of anthropomorphism. Jeffrey Masson and Susan McCarthy, in their book When Elephants Weep, deal with these issues. They talk about the resistance to these ideas they encounter from some people - but mostly from academics.

Bekoff: I think many of the examples Masson writes about could be explained in different ways, but what people tend to do, when they look at his stuff and some of yours and even some of mine, is to throw out the baby with the bathwater. I find the Jaytee experiments in your book very convincing. Perhaps we need to demand of the skeptics that they mount a better defense of their positions. It's always easy to dismiss the amazing abilities that animals have.

Sheldrake: We should call the skeptics' bluff. They are always saying that extraordinary claims demand extraordinary proof. I would ask them: What is a more extraordinary claim - that millions of people over many generations have observed these things with their dogs or other animals? Or that people who have never investigated it at all should be able to dismiss the experience of millions on some theoretical ground without offering any empirical evidence of their own? If they want to dismiss animal emotions, then they should have to explain exactly why animals can't and don't have emotions, when most people think they can and do.

Bekoff: We need to spend a lot more time thinking about and observing dogs and cats, as well as wild animals. Before we make these claims about the things that they can't do. As I'm doing this emotion work now I have had to invite a whole bunch of my colleagues to come out of the closet.

Bekoff: Absolutely. I was thinking about how the notion of holism is so daunting because scientists get paid to dissect things, whether they're animals or neutrons. Science aims to break things down, level by level by level. But then when scientists try to reassemble larger systems, they find they can't do it. I was really taken by your whole notion of the different levels of self-organization. You said that it was very difficult to really write about or demonstrate the evolution of these morphic fields, but I think that this is a very hot area. The way you bring this stuff home is by talking about animals such as cats and dogs and horses and cows, the animals with whom most people are familiar.

Sheldrake: And these are the animals people know very well, much better than most professional animal researchers, who may spend time in the field but certainly don't live with the animals they research.

Bekoff: As for the evolution of this ability, there's no doubt that some people are better at it than others. There's no reason to think that there hasn't been some selection for variation. Once again, as a biologist, when we talk about evolution we're looking for individual variation. It's no different from being able to run fast of jump high - the ability to intuit or make telepathic predictions about where another individual will be in a split second. There is some really good framework here for talking about the evolution of it.

Sheldrake: Yes. It must be of enormous advantage; individuals that bump into others at high speed are obviously going to be at a disadvantage.

Bekoff: Because of your background your research has people really thinking. As a culture we tend to worship the hard sciences, physics and chemistry. So the response is, "Now here's somebody who's trained in physics and really thinks about these things, so there must be some kind of material foundation for this stuff". What you're doing is going to really change the way people think. I'm grateful that you do it.

Sheldrake: I'm delighted you think that. There are very few people in the scientific world who can quite see this and cut through the prejudices that are deeply imbedded during scientific training.

Bekoff: I really do believe that people are simply afraid at a deep level of what this could all mean in terms of how we interact with nature and other animals. I've been working with Michael Tobias, who has written an excellent book entitled World War III. He works with environmental problems and with animals, and one of the things that we talk about is just how differently people talk about and view the world compared with how they actually treat the world. If dogs could be telepathic and if chimpanzees do feel intense grief - as Jane Goodall has shown - what this would mean is that animals are not objects and we can no longer treat them as objects. They're not mere things for us to do with what we please. The whole world is alive. I hope people pick up on this, and I believe that they will. Obviously the way we've been doing things for the last couple of centuries hasn't worked.